A salesman was traveling through the Kentucky country side, selling insect repellent. He came to a farmhouse and tried his pitch on the farmer.

“Sir, my bug spray is so good you will never be bitten again. I guarantee it.”

The farmer was dubious. “Young man, I'll make you a proposition. I'll tie you out in my cornfield buck naked, covered with that bug spray. If there is not a single bite on you come morning, I'll buy a whole case from you, and get everyone in the county to buy a case we will make you rich.”

The salesman was delighted. They went to the field and he stripped. The farmer sprayed him thoroughly with the bug spray and tied him to a stake. Back to the house went the farmer.

The next morning, the farmer and his family trooped out to the cornfield. Sure enough, the salesman was there, hanging in his bonds, not a single bite on him. Yet he was a total wreck! Pale, ghastly, haggard, and drawn, but not one bite on him. The farmer was perplexed.

“Son,” he said, “Now, you don't have a bite on you but you look like hell! What the devil happened?”

The salesman looked up through bloodshot eyes and croaked, “Doesn't that calf have a mother?” 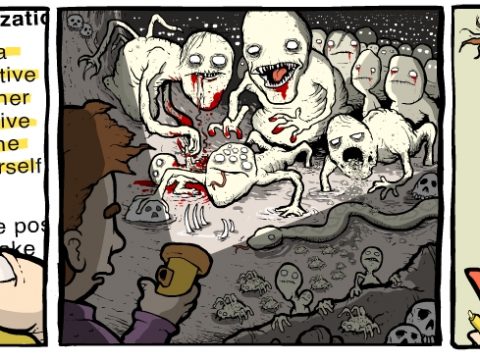