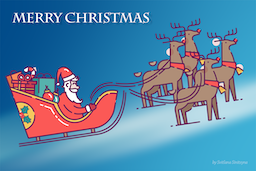 Helen & myself wish everyone a Merry XMAS and Happy New Year. It has been a year to forget with Covid-19 but we hope everyone made it safely past the pandemic and all of the other world issues.

By the way the image was created by Svetlana who used to help out RBR with images and stuff, originally from the Ukraine her family is now on the Isle of Man